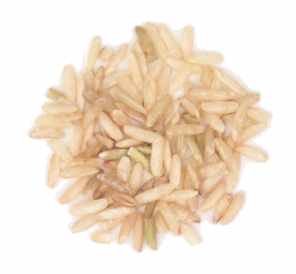 Brown rice is not only the better choice nutritionally but it is also better for the environment. Rice goes through several processes after harvest before its ready to be cooked. After harvest, the seeds are milled to remove the outer grain husks leaving the brown rice. To get the white rice, the brown rice has the germ and the inner husk or bran removed. The grain is then polished with glucose (a simple sugar) or talc. The extra processes remove a lot of the rice’s nutrients which are then reinfused synthetically and called fortified white rice!! This is a similar process to brown and white bread.

The environmental benefit happens in the energy savings with brown rice because you don’t have the extra processing as well as the extra costs involved in chemically re-infusing the very nutrients you have just removed!! Brown rice, however, does take longer to cook so some energy is lost there but this can be mitigated by pre-soaking the rice and by using less water with the pot lid on to keep the steam in. The steam also helps speed up the cooking process and save more energy.

Richard McAteer
23:29 25 Sep 21
Has certainly helped me recover from a few sports injuries.

Helga Otto
19:02 29 Mar 21
I have been a patient of Dr. Campbell’s for many years and trust him completely. He always makes me feel better. I especially appreciate that he has been accessible throughout the pandemic.

Loanna Maidment
22:15 12 Mar 21
I highly recommend Dr Campbell’s services. I’ve seen him for various issues over the years and have always been pleased and appreciative of the care he provides.Collin is quickly able to diagnose the issue and goes to work. What sets him apart is that he doesn’t keep you longer than needed. A number of times, he’s sent me off with exercises when he’s done all that was required. Initially, I was worried it was too soon, but it never was. He’s good!

Keith Moore
21:24 25 Feb 21
I have been to many chiropractors over the years and I can say without hesitation that Dr. Campbell is the best I have seen. His assessments are very thorough and his treatments amazing! I have sent family members and many friends to see him. Highly recommend!

joshua andrews
01:07 16 Dec 20
Colin has been a great help to me and my family. He has always been very professional and honest. I would highly recommend his practice to get you going again.
‹
›
Follow